Yogyakarta (6/6). The Covid-19 pandemic has forced all work and activities that are usually carried out outside the home to be limited. Even though in the midst of the limitations during the pandemic, the younger generation must continue to develop creativity in channeling their interests and talents such as making music, one of the efforts that can be done is to take part in acoustic competitions. This activity aims to develop creativity, skills, and as a form of expressing oneself in music through digital platforms. Dynamic Event Organizer held an Acoustic Competition & Music Talk 2021 with the theme “Create Your Moment Share Your Talent” for the Acoustic Competition and “There's Music In You” for the Music Talk, with the hope that this activity can serve as a forum for the younger generation to develop creativity and express in the arts, especially in music. The Dynamic Event Organizer was formed by six students of the Office Administration Education Study Program class of 2019 as a fulfillment of the tasks of the Event Management course which was led by Ms. Rr Chusnu Syarifa Diah Kusuma, S.A.B., M.Sc.

The Acoustic Competition activity was held from April to June, then continued with a peak event called Music Talk which was held on Sunday, June 6, 2021. The Acoustic Competition was attended by 24 acoustic groups from various regions in Indonesia. Acoustic Competition participants are spread across 9 provinces and 18 cities in Indonesia, including from Cirebon, Tasikmalaya, Ciamis, Malang, Surabaya, Tuban, Madiun, Lumajang, Trenggalek, Banyumas, Pekalongan, Kebumen, Yogyakarta, Jambi, South Sumatra, North Sumatra. , Jambi, South Kalimantan, and the Riau Islands. In this competition there are three judges, namely Clarissa Yovianingtyas, S.Ab., M.AB. (Uny Office Administration Lecturer), Dendy Derganata Gustria, S.Ab. (Seniman) and Willyam Stevano Lusi, S.Psi (Session Player Keyboard/piano for several musicians/artist/band, Music Coach and Music Consultant in several agency and High School, Music Director and Arranger for 626 Music Production). The highlight of the Music Talk was attended by Willyam Stevano Lusi as a resource person. He is a music practitioner/musician, besides that he is also a music coach and music consultant in several institutions and high schools. The Music Talk program was hosted by a moderator from one of the students of the Faculty of Economics of UNY named Acha Wahyu Hidayah and two Masters of Ceremony, namely Priyanka Nada Muhammad and Icha Choirunissa who are students of the Faculty of Economics of UNY. 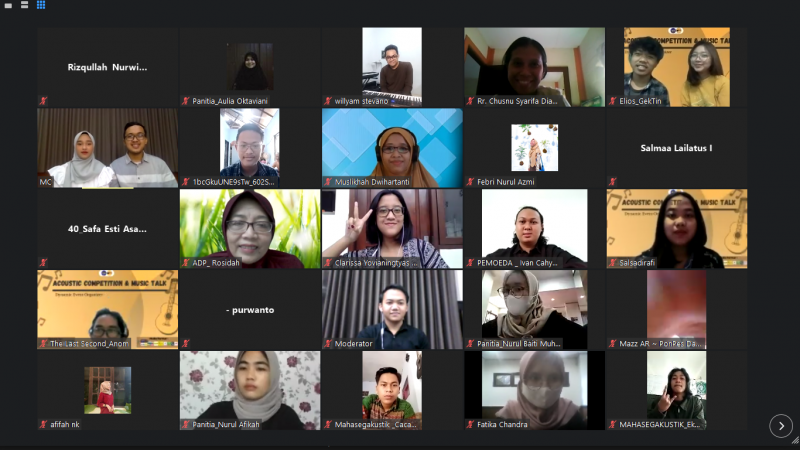 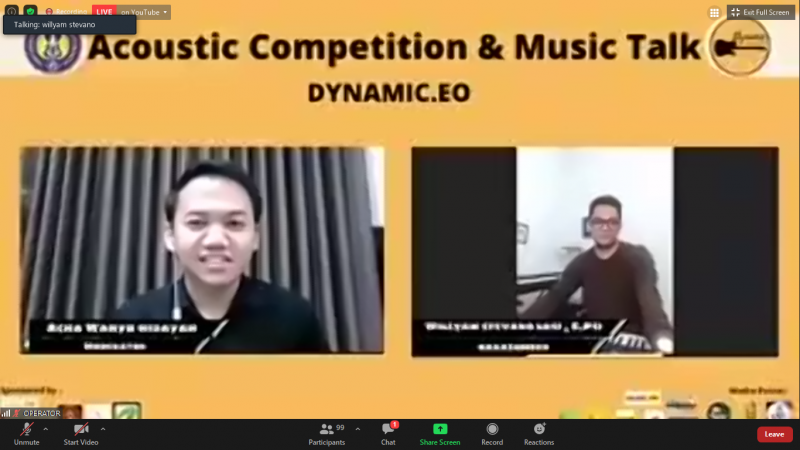